The fourth USS Virginia (BB-13) was laid down on 21 May 1902 at Newport News, Virginia, by the Newport News Shipbuilding and Dry Dock Company. She was launched on 6 April 1904 and commissioned on 7 May 1906.

While the Virginia was completing her shakedown cruises, events were occurring in the Caribbean that would alter the new battleship’s employment. On the island of Cuba, in August of 1906, a revolution had broken out against the government of President T. Estrada Palma. The disaffection, which had started in Pinar del Rio province, grew in the early autumn to the point where President Palma had no recourse but to appeal to the United states for intervention. By mid-September, it had become apparent that the small Cuban constabulary (8,000 rural guards) was unable to protect foreign interests, and intervention would be necessary. Accordingly, the USS Virginia departed Newport on 15 September 1906, bound for Cuba, and reached Havana on the 21st, ready to protect the city from attack if necessary. The battleship remained at Havana until 18 October, where upon she returned to Hampton Roads.

Later, the Virginia participated in a show of American military might – the cruise of the “Great White Fleet.” The cruise began eight days before Christmas of 1907, and ended on Washington’s Birthday, 22 February 1909. During the course of the voyage, the ships called at ports along both coasts of South America, the west coast of the United States, Hawaii, the Philippines, Japan, China, and in Ceylon. Both upon departure and upon arrival, the fleet was reviewed at Hampton Roads by President Roosevelt, whose “big stick” diplomacy and flair for the dramatic gesture had been practically personified by the cruise of the “Great White Fleet.”

Following that momentous circumnavigation, the Virginia spent time along the eastern seaboard, Europe, and the Caribbean. Eventually returning to Hampton Roads in mid-March 1914, she maneuvered with the fleet off Cape Henry and in Lynnhaven Roads before she conducted gunnery drills at the wreck of the San Marcos (ex- USS Texas) in Tangier Sound, Chesapeake Bay. She spent most of World War I being overhauled and then escorting convoys across the Atlantic. After the signing of the Armistice, the Virginia found herself transporting troops back to the United States. Reaching Boston on Independence Day 1919, ending her last troop lift, the Virginia ended her transport service, having brought some 6,037 men back from France.

The USS Virginia remained at the Boston Navy Yard, inactive, until decommissioned there on 13 August 1920. Struck from the Navy list and placed on the sale list on 12 July 1922, the battleship-reclassified prior to her inactivation to BB-13 on 17 July 1920-was subsequently taken off the sale list and transferred to the War Department on 6 August 1923 for use as a bombing target.

The USS Virginia and her sister-ship, USS New Jersey were taken to a point three miles off the Diamond Shoals lightship, off Cape Hatteras, North Carolina, and anchored there on 5 September 1923. The “attacks” made by Army Air Service Martin bombers began shortly before 0900. On the third attack, seven Martins flying at 3,000 feet, each dropped two 1,100-pound bombs on the Virginia — only one of them hit. That single bomb, however, “completely demolished the ship as such.” An observer later wrote: “Both masts, the bridge, all three smokestacks, and the upper-works disappeared with the explosion and there remained, after the smoke cleared away, nothing but the bare hull, decks blown off, and covered with a mass of tangled debris from stem to stern consisting of stacks, ventilators, cage masts, and bridges.” Within one-half-hour of the cataclysmic blast that wrecked the ship, her battered hulk sank beneath the waves. Her sister-ship ultimately joined her shortly thereafter. The end of the Virginia, as well as that of the New Jersey, provided far-sighted naval officers with a dramatic demonstration of air power and impressed upon them the “urgent need of developing naval aviation with the fleet.” As such, the service performed by the old pre-dreadnought may have been her most valuable.

Today, the USS Virginia rests in approximately 390 feet of water off North Carolina, though the washout around the bow approaches 420 feet in depth. 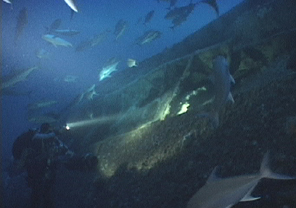