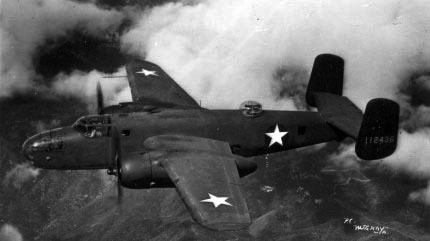 The Doolittle Tokyo raid was perhaps the most famous exploit of the B-25 Mitchell. It was carried out in an attempt to shore up morale on the home front during the early months of 1942, which was sagging as a result of suffering defeat after defeat in the Pacific.

Planning for a retaliatory raid on the Japanese home islands seems to have begun very soon after the attack on Pearl Harbor. A “Tokyo project” was quickly and secretly formed, with Lt. Col. Doolittle and Captain Duncan assigned project responsibilities for their respective services. Lt. Col. Doolittle would lead a picked crew of aviators who would launch an attack against the Japanese home islands from the deck of the aircraft carrier USS Hornet. Although it was believed that it was indeed feasible to launch medium bombers from the deck of an aircraft carrier, it was impossible for these types of planes to land back on the deck of the carrier once the raid was over. Consequently, plans were made for the planes to be recovered at prearranged airfields in eastern China at the end of the raid. From there, the bombers would continue on to Burma.

The plan required an aircraft with an overall range of 2400 miles carrying a 2000-pound bomb load and capable of taking off from the deck of an aircraft carrier. The only two possible candidates at the time were the Martin B-26 Marauder and the North American B-25 Mitchell. The B-25 was selected on the basis of its superior takeoff performance.

At that time, the only B-25s in service were with the 17th Bombardment Group. The 17th Bombardment Group comprised the 34th, 37th and 95th Squadrons, plus the attached 89th Reconnaissance Squadron. This group had been transferred from Oregon to South Carolina in order to meet the greater threat from German submarines operating off the East Coast. 24 B-25Bs were diverted from the 17th Bombardment Group, and volunteers were recruited, the crews being told only that this was going to be a secret and very dangerous mission against heavy odds.

Certain modifications had to be made to the B-25Bs to make them suitable for the mission. Since the raid was going to be made at low level, the retractable ventral turret was removed, saving about 600 pounds of weight. More fuel was added to the plane, bringing the total fuel load to 1241 gallons — 646 gallons in the wing tanks, 225 gallons in the bomb bay tank, 160 gallons in a collapsible tank carried in the crawlspace above the bomb bay, 160 gallons in the ventral turret space, and ten 5-gallon cans for refills. The still-secret Norden bombsight was removed, lest it fall into Japanese hands. It was replaced by a makeshift bombsight that proved more satisfactory for low level operations. The bomb load consisted of four 500-pound bombs. As a deterrent against Japanese fighters making stern attacks, a pair of dummy guns in the form of wooden sticks, painted black, were attached to the extreme rear fuselage, protruding out the back of the transparent tail cap. Takeoff weight was about 31,000 pounds.

Two Mitchells had been flown off the deck of the carrier, USS Hornet, on February 3, 1942, confirming that the basic concept was feasible. The volunteers moved to Eglin Field in Florida for training. Still not knowing what kind of mission they were training for, the crews practiced making takeoffs in as short a distance as possible. It was found that with a reasonable headwind, a B-25 could get airborne with a 450-foot run.

Upon completion of training, the crews left Elgin Field for McClellan Field in California. On April 1, the crews departed McClellan for Alameda Naval Air Station Base near San Francisco. 16 B-25Bs were all that could be loaded onto the Hornet, although all of the crew members that trained for the mission embarked aboard the carrier in case back-ups were needed. The task force steamed off toward Japan on April 2.

A chance encounter with a Japanese picket boat forced the raid to be launched at a distance greater than the 400 miles offshore that had originally been planned and ten hours ahead of schedule in a rough sea. On April 18, 1942, Lt. Col. Doolittle’s plane took off from the Hornet, followed by the 15 others. They headed for Japan, which was over 700 miles away.

The Mitchells successfully bombed targets in Kobe, Yokohama and Nagoya, as well as Tokyo. The bombing altitude was about 1500 feet. No aircraft were lost over the target. However, bad weather prevented the flyers from finding their prearranged landing fields in China, and eleven of the crews had to bail out while four others crash-landed. One B-25B (40-2242) was flown to Vladivostock, Russia, where both the aircraft and crew were interned.

All sixteen B-25s that took part in the mission were lost, seven men were injured and three were killed. Eight crew members were taken prisoner by the Japanese. Only four of those eight survived the war. The survivors who had landed in Japanese-controlled territory were sheltered and attended by courageous Chinese, and for this the Japanese occupying force in China wrought full vengeance on the local population.

Doolittle at first told his crews that he thought that the mission had been a total failure and that he expected a court martial upon his return to the United States. Although all the aircraft were lost and the damage inflicted during the raid was minimal, the operation provided an incalculable boost to American morale when just about everything else in the Pacific was going badly. It also pointed out the vulnerability of the Japanese homeland to bomber attack, and four first-line fighter groups were retained in Japan rather than being sent to the Solomon’s where they were urgently needed. Instead of being court-martialed, Doolittle was promoted to Brigadier General, awarded the Medal of Honor, and assigned a new command with greater responsibility.

There are misconceptions to the involvement of the Doolittle B-25s at Columbia, South Carolina. While training missions simulating low-level bombing runs were conducted over Lake Murray in Lexington County, these occurred after Doolittle’s mission.

Training over Lake Murray in 1943 did result in lost aircraft though, as most of these crews were young and inexperienced, thus accidents stacked up. Several B-25s crashed into the lake, as crews misjudged altitudes or banked too steeply, catching a wingtip into the water. Records indicate that at least five B-25s crashed into the lake, three were immediately salvaged, and at least one remained abandoned at the bottom of Lake Murray. Many have tried to find the B-25s, and rumors of located aircraft within the dark waters of Lake Murray have circulated thru the years. Whatever aircraft that have been found by private groups and kept secret, one aircraft in particular, a B-25C (serial #112634), lost in April of 1943, has been found by a group of divers contracted by Dr. Robert Seigler.

Resting on the muddy lake bottom, the bomber is relatively intact. The left wing tip is missing outside of the engine, and the right engine has been ripped off and is absent. The fuselage is in decent shape, with the markings and the tail number “41-12634” still visible. Currently, this historic aircraft is under the jurisdiction of the South Carolina Institute of Archaeology and Anthropology (SCIAA) and is closely monitored by the local Coast Guard Auxiliary and law enforcement. Dr. Seigler has been granted salvage rights from SCE&G, the property owners of the lake, and he coordinated the recovery of the B-25 with Gary Larkins in September 2005.